Getting Started: The Memphis Daily News

Farmhouse was featured in The Memphis Daily News in an article giving small business owners advice on getting started. To read the article on their site, head to https://www.memphisdailynews.com/news/2017/aug/12/getting-started/ , or read the transcript of the article below.

Every journey of a thousand miles begins with that first single step. Every song, that first note; every long-lasting relationship can trace back to that first hello.

The countless business startups in Memphis, many maturing thanks to the city’s myriad accelerators and entrepreneurship programs, likewise all unfold the same way. They all start, no pun intended, with that first idea that leads to the creation of an enterprise – hopefully a successful, money-making one.

The distance between that first idea and anything resembling success, of course, is the pivot upon which the whole thing turns. How does a founder navigate that distance – get started, as it were? 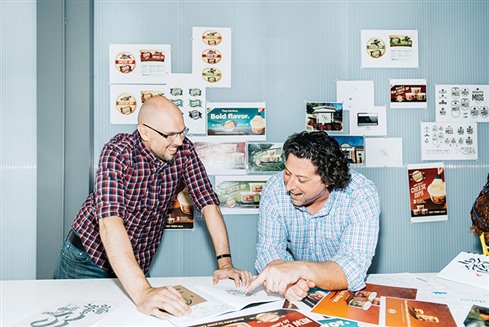 Danny Shearer bags coffee beans in the back of French Truck’s Crosstown Concourse location. The coffee shop has expanded to two locations with its recent opening in the Crosstown building’s central atrium. (Memphis News/Houston Cofield)

That question has no shortage of answers. All of them, in their own way, are relevant, especially now with the city’s startup ecosystem continuing to make strides. The spotlight recently shone on 16 startups participating in this year’s “Summer of Acceleration” Demo Day on Aug. 10, the yearly gathering when startups that have gone through a consortium of local accelerators make pitches for investor funding.

Those startups this year include everything from EMBrace, which has created a back support device for people suffering from diseases of the spine, to ArtSquare, an online marketplace for artists.

Many of the teams came here from around the country for the summer from cities like Los Angeles, Chicago and Houston. And they spent their time here putting meat on the bones of their ideas – fleshing out concepts, shoring up business models, identifying customers, cementing relationships and more.

If you look elsewhere in the city, Scott Vogel – a serial entrepreneur in Memphis who’s worked around the startup scene for a while now – leads the new Center for Innovation inside Regional One Health, which itself amounts to a kind of startup inside the hospital. His goal for the center is to incubate new ideas and perhaps ventures that could help break through the health care status quo.

Vogel will talk about what the center is doing and how its lessons can be applied to other organizations as the keynote speaker at The Daily News’ Aug. 17 Startups Seminar. The event will be held at the Memphis Brooks Museum of Art at 3:30 p.m.

What about the starting point, though?

Whether it’s the hospital setting, medical device startups or any of the other fledgling ventures working their way through the startup ecosystem in Memphis, several small business and startup founders talked with The Memphis News to share ideas about what they think entrepreneurs should consider before hanging out their own shingle.

Joining Vogel at next week’s seminar will be a panel of thought leaders who will weigh in on these and other topics that entrepreneurs should carefully weigh. They include FrontDoor CEO and co-founder Jessica Buffington; StartCo. president Andre Fowlkes; and marketing strategist Susan Ewing.

For now, here’s a sampling of some advice from a roundup of small business leaders:

Ben Fant, principal and creative director at the marketing and advertising agency Farmhouse, thinks there’s one basic, indispensable ingredient needed to launch a small business or startup: “being fearful.”

“You should have fear – the fear of failure – because that is a real thing,” said Fant, whose agency celebrates its 10th anniversary this year. “Eighty percent fail. But you need to face your fears. Overcome them. Learn how to harness it to bring out the best in you.”

Because doing all that, he says, helps give you the edge needed to not only develop a business like his that will get to its 10th anniversary, it also will “make you fearless.”

“I tell this to all of my clients when I first consult with them, and then I joke, ‘What do you have to lose? It’s only your life savings,’” Fant says. “I know now that I was right about a lot of things and wrong about a lot more.”

Startups and small businesses also get past those early, lean months and then the first formative years by “surrounding yourself with great people that believe in you.” That includes the lawyer, accountant, bookkeeper, partners and staff. They need to be good at what they do, of course, but Fant says they also need to all buy in to the mission and support the founders. He calls them the founders’ “personal executive board” that is needed in both lean times and abundant times.

Meanwhile, at Farmhouse these days?

“I do more listening and less talking,” Fant says. “I wait for opportunity instead of forcing it. I learned that I know myself, my business and my offering, as well as I did on Day One, but now I understand why people value it and me.”

Jimmy Lewis, meanwhile, approaches the concept of fear in a different way. Lewis – a serial entrepreneur who founded natural-foods store Squash Blossom Market in 1979 and who today is a partner with French Truck Memphis – takes a more philosophical bent.

There’s a military adage that says no battle plan survives first contact with the enemy. All those unforeseen things that come up during the heat of battle – and so it is with startup founders. But even so, many of them still stress that it was at least the well-defined outlines of a plan that helped get them off the starting block.

They include Lisa Toro, who with her husband Luis founded the combination retailer and coffee shop City & State in the Broad Avenue Arts District. They’re also in the process of bringing a new restaurant to fruition in that same area, The Liquor Store.

The key to making it all work, as far as Lisa Toro is concerned, is “do your homework on the front end.”

“Meaning, if you are considering a building, bring in trusted professionals to evaluate and estimate the true costs of construction,” she says. “Get help from someone with experience when evaluating a lease, and know that it’s always worth paying professionals in areas such as legal, accounting and construction.”

Elizabeth Cawein is the principal at Signal Flow PR, a publicity shop with a music-industry specialty. She advises a willingness to put in long hours, to leave little to chance.

“When I started Signal Flow, I was at work every day at 8 a.m. and didn’t leave the office until 6 p.m.,” she says. “Looking back, I had no clue what I was doing with all that time, but I also know it was a key piece of my long-term success. It gave me time to read, research and learn, but really that habit built a foundation of a work ethic that has been critical to any accomplishment I’ve made.”

Jenny Kiesewetter puts her own spin on a version of that advice. She manages her own law practice and preaches the gospel of focus and fearless individuality.

“Stay true to who you are,” she says. “Don’t let others try to sculpt you into who you aren’t. Listen to your gut. And play to your strengths. Even if they’re different than others in the industry, your unique strengths and abilities will get you to where you need to be.”

DON’T HESITATE, STAND OUT
(or ask for a helping hand)

Shannon Little left her job in marketing with the Huey’s restaurant chain in Memphis to start her own solo marketing and social media venture. Such ventures that at first glance might seem a dime a dozen, leaving her with a task that had to be addressed before meeting with her first client.

She now handles marketing and social media efforts for several small businesses and is able to juggle all the tasks that go with that because she took time to form a plan for herself at the very beginning.

“Define your target audience, your offerings and what value those offerings can bring to that audience,” Little said. “My business became stronger, and my processes more streamlined, when I was able to define those terms.”

For all the advice and insights that small business and startup founders need to keep in mind – and to execute – to make their ventures a success, it’s also important to keep in mind the limits of that wisdom.

There are abundant resources available in Memphis for founders of these new enterprises. EPIcenter president Leslie Lynn Smith – her organization being a kind of hub for myriad entrepreneurship efforts and programs – urges founders: take advantage of what’s here. Because you’re not alone.

“Some of the advice we try to give founders is to really try to make the best of their time in this fully embracing environment, where you basically have an entire community that’s willing to do anything for you,” she said of the startup ecosystem in Memphis. “I was at the (Greater Memphis) Chamber today, and (president and CEO) Phil Trenary was telling me he met with one of our startup founders, and she asked him to make five connections which she thinks are critical connections during her launch. That’s the one piece of advice I would give – is to not be afraid to ask for every single bit of support you need during this experience.”